Federal Policy Update – A summary of The House Select Committee on the Climate Crisis Report – “Solving the Climate Crisis: The Congressional Action Plan for a Clean Energy Economy and a Healthy, Resilient, and Just America” is included in your packet. Among many forestry and carbon items, there is a section addressing urban forestry. Where this will go remains to be seen. It will certainly be after the election, and depends on which party will be in charge what environmental policies will move forward.

Also attached is a memo reflecting on the House Appropriations funding from 2020 and projections for 2021 for urban forestry related funding – State and Private Forestry (where urban forestry resides) reflects an overall cut, but other line items see slight increases.

Cal Fire – We have received out signed contract back from CAL FIRE for the new “Amplifying California’s Urban Forestry Movement Grant”. Planning for the program, will begin toward the end of August. I have submitted an invoice for an advance payment on the program.

CUFAC – A Zoom meeting was held on August 5, 2020 with the main focus on completing the new Strategic Plan which before year’s end will go to Chief Porter for review and approval. This plan is a guide to CAL FIRE Urban and Community Forestry program staff with suggested goals, actions and practices for the improvement of the urban forest.

State Policy & Advocacy  – On July 28th, via Zoom, I met with advocacy/lobbying reps from LiUna (a CA Labor Union) and Kip Lipper, Environmental Consultant for the California Senate, working directly for Toni Atkins, the Senate Pro Tem. I’ve met with Kip many times before. This was a warm welcome, and even though the Greenhouse Gas Reduction Funds are essentially non-existent, there are a few million being fought over. He was positive, and after the meeting, when I sent him our two-pager, he responded immediately asking if we would be satisfied with a couple of million $$. Of course, I said yes. I have sent him a follow-up today with our new infographic, checking-in to see if there is anything else we can do to support the cause. If this happens, it could very well be focused on Green Jobs, as it is being reported that the Governor is working on a jobs program.

CIRCLE 4.0 (Cap & Trade Funding) – The signed docs were just returned and the planning for this grant, which runs till 2024, will begin via Zoom, toward the end of the month.

Cool Parks Program – We tentatively have plantings coming back online in October and November 2020; to be confirmed as we get closer and COVID-19 impacts are being assessed. We have till 2022 on this grant so there is a lot of flexibility to meet obligations. Meanwhile we are planning for the future. We are working on protocols for planting events and additional safety materials and procedures now. 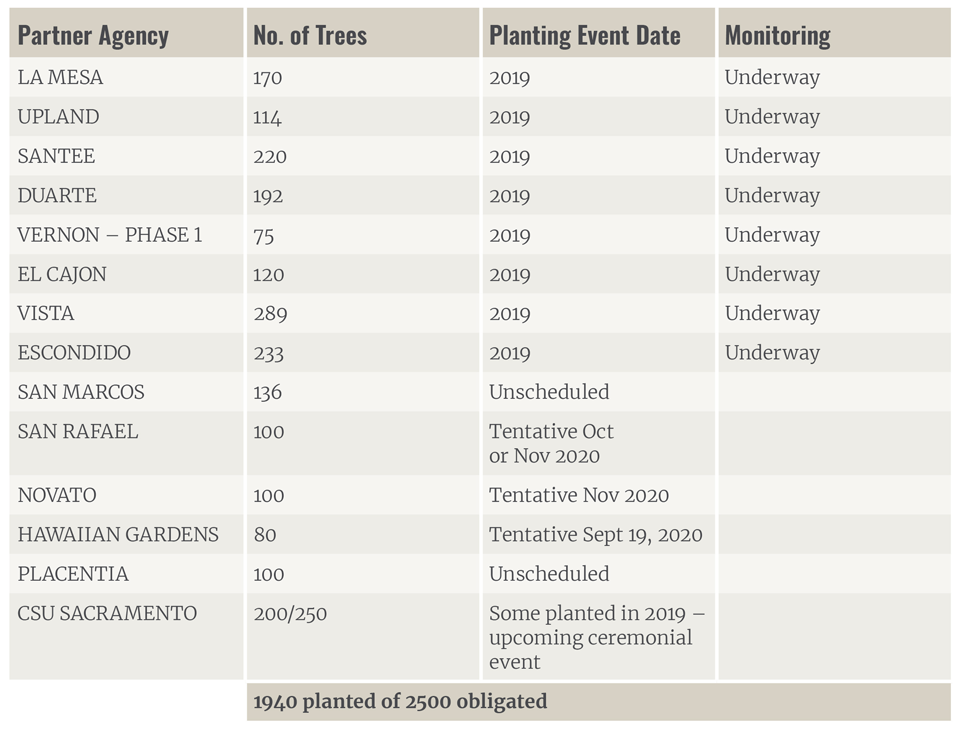 City Forest Renewal.  This project is moving forward as COVID19 is less impactful.

Other – We finally received the funds from the Paycheck Protection Program via Wells Fargo!

The “Trees Are Essential Campaign” has launched – please go to our site and take a look.  Also, we NEED you, as leaders of this organization, to spread the word!  Please follow us on FaceBook and other social media and forward out our messaging.  Take the survey.  Help us gather this important information!  Thanks you!